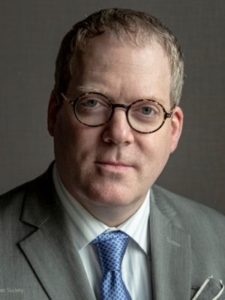 He has worked on Internet infrastructure and standards since 2001. In 2012 he joined Dyn (later, Oracle Dyn) to establish Dyn Labs and then to manage the DNS development and architecture departments. His activities in this area led to him being appointed to the Internet Architecture Board (IAB) in 2013. His IAB colleagues elected him Chair in 2015 and 2016.

Andrew’s IAB tenure coincided with the Internet Assigned Numbers Authority (IANA) stewardship transition. Andrew was deeply involved in the community’s efforts around the transition and played a central role in its eventual success. His expertise in the area was acknowledged when he was invited to testify about the transition to the United States Senate Committee on Commerce, Science, and Transportation.

Before joining Dyn, Andrew was a principal contributor to the Variant Issues Project (VIP) undertaken by the Internet Corporation for Assigned Names and Numbers (ICANN). The VIP was an effort to bring together several different, previous efforts in support of internationalized domain names. The VIP was made of teams from all over the world, working on five major writing systems. Andrew worked with all of them to try to gather together the needs of the many different linguistic communities of the world, and the Internet’s critical value as an interoperable, neutral platform. The positive results of the VIP are being expressed every day through Internet-scale internationalized domain names.

At the beginning of Andrew’s Internet infrastructure career, he worked to launch the .info Internet top-level domain in 2001. Because of that experience, he was part of the team that collaborated with the Internet Society to launch Public Interest Registry, and take over the operation of the .org top-level domain. These registries used PostgreSQL, an advanced open-source database management system. Because of his work in this area Andrew organized the PostgreSQL Anniversary Summit, held at Ryerson University in Toronto in 2006.

Andrew was born in Buffalo, NY, USA to Canadian parents, and has lived most of his life in Canada. He holds a Baccalaureate of Arts (Hons) from the University of Ottawa, and a Master of Arts from McMaster University, both in Philosophy. His graduate work on the philosophy of economics led him to his interest in free/open source software and open Internet protocols and standards. He carries that interest and passion forward to his position at the Internet Society.