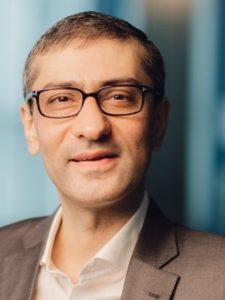 Rajeev was appointed as Inmarsat’s Chief Executive Officer in March 2021. He joined Inmarsat from Nokia, where he was most recently President and Chief Executive Officer. From 2009 to 2014 Rajeev was Chief Executive Officer of Nokia Solutions and Networks. During his tenure as CEO, he transformed Nokia into a top two telecommunications infrastructure company, led the consolidation of the sector from ten to three major players, positioned Nokia as a leader in a world connected by 5G and shaped by increasing digitalisation and automation. Under his leadership, Nokia acquired the networks businesses of Siemens, Motorola, Alcatel-Lucent, including the famed Bell Labs, successfully expanded into enterprise vertical markets, created the world’s leading standalone telecom software business, significantly grew the annual recurring revenue patent licensing business and engineered the return of the Nokia brand to mobile phones.

Rajeev has lived and worked in the Middle East, Asia, Africa and Europe. He was a Commissioner of the United Nations Broadband Commission, Co-Chair of the digitalisation task force for the B20 and member of various digital and healthcare committees at the World Economic Forum. Rajeev was a member of the Chinese Premier’s Global CEO Council from 2014 to 2020, a recipient of China’s Marco Polo award; the highest honour awarded to an international business person from the Chinese government. Rajeev is an engineering graduate in Electronics and Communications and has been awarded an Honorary Doctorate by Manipal University.

Universal connectivity expands the frontiers of human possibility.  It allows children to learn, keeps families connected, and promotes innovation and sustainable development.  I am the CEO of a satellite company, and am very proud that we provide connectivity everywhere, helping improve life for everyone on the planet.